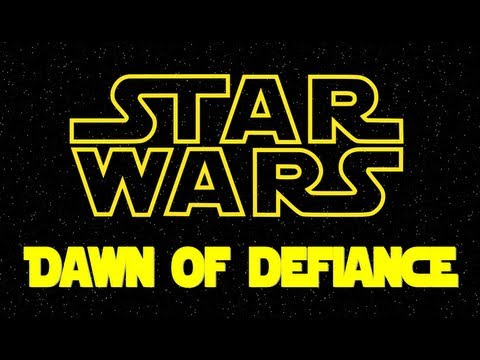 STAR WARS – Rise of Rebellion is a campaign to take a group of characters from before the Rebellion Against the Galactic Empire was declared through the Battle of Endor or perhaps beyond. Characters will begin 3 years before The Battle of Yavin and will have the opportunity to meet major characters and take part in major battles that formed the Star Wars universe.

In the beginning the characters will take part in The Dawn of Defiance, a ten part adventure series that will make them part of the foundation of the Rebellion against the Empire. I expect the timeline to be flexible and semi-correcting meaning the players can impact what happens and when, but in general the timeline will sway towards the continuity of the original material when possible (so they may save Alderaan from the Death Star only to see it fall to conventional attacks like those used on Desevro), although they may have enough warning to evacuate residents or even prevent those attacks. Players may realize they have deviated form the original storyline, but in the past players have enjoyed changing stories through their character's actions. While I expect members to be full rebels that doesn't mean they can't come from a diverse background, many rebel heroes were former scoundrels or even Imperials.

Details may change, but in general the campaign will use the house rules we have adapted in our latest game unless something proves to need adjustment. In the early part of the campaign the rebels will be limited to older designs like Z-95, Zebra, and Gauntlet fighters with the Y-Wing being the most advanced design available. Imperial forces will mostly have Tie/Ln fighters already with Tie/Gt, Tie/Rc, and Tie/Fc support units and some may even have older T.I.E. versions still, but the Tie Bomber and Tie Interceptor haven't been invented yet.

As the game moves through the timeline newer ships will become available to both sides with my preference being to have the characters involved in the missions to secure the new fighters for the Rebels.

While characters haven't gone there yet I added a sector combining the elements of Battletech and Shadowrun (mostly Battletech) and called it the Machi Sector. My plan is to eventually set up a mini-campaign in the area like those set up for Tapani, Elrood, and Minos sectors so characters remain in the Star Wars universe while exploring a somewhat more backwards region.

The player characters are part of a secret unit called Phoenix Squadron consisting of a nebulon B cruiser and five corellian corvettes. Their squad Vlakas Viaios has been charged with uncovering what the Imperial Project Sarlac is, and if necessary shutting it down before it can cause harm to the galaxy.

The group just finished their 7th session and took part in the liberation of Nar Shaddaa and Dac (Mon Calamari). A player was nearly lost to Defel assassins forcing the group’s first major retreat.

The team has vast amounts of supplies and still considerable cash resources, but certain vital items are not in the level of supply they want. Time constraints have been a major factor (I use a system that restricts characters to 1 significant endeavor per day on worlds – a policy stemming from old campaigns that while it sometimes frustrates players does force them to choose actions carefully).

The rapid pace in the campaign with the group jumping from one battle to another fits the cinematic style. It may keep up for a while yet as even though they are 2 years from the battle of Yavin still there is a lot going on.

While my idea with this campaign was to streamline and simplify the rules while giving more balance (particularly when new players are added to an experienced group) I have added a number of new rules which weren’t in the original material.

Most of them simply place rules on things which weren’t covered in the rules as they weren’t needed (mining, farming, building equipment, drugs, and genetic modification). Many of them were introduced haphazardly over the years and the rules were imbalanced or illogical, so I’ve tried to make them more consistent. One of the major components is the jury rig rules which I left largely unchanged but applied to all manner of enhancements (the only major thing left would be to apply it to equipment bonuses in general – it won’t happen this campaign but could in the future).

The 30 skill system seems to hold up well, and the force seems sufficiently powerful and limited for my current group. Damage capacities make t a little difficult to drop an opponent, but also keep the players from dropping too quickly so I’ll likely leave it alone. Players have really enjoyed the Skill for Initiative and positioning rules in combat (although now the Gauntlets and Y-Wings are fearsome opponents).

I have backed off on the threat of Dark Side points (it has only come up once and was from a player, not me) and been generous with force points (given all players a force point every session) allowing me to keep the danger level high without killing off any players yet (a few have come close). Finally the ability to interact with name characters still has some appeal (the characters are working for Bail Organa, one of them is playing a young Leia, and they have met Wedge Antilles, Winter Retrac, and Shaak Ti with some out of game interaction with Ahsoka and a few other Jedi believed to be killed in order 66).

Players have lots of drugs, but the threat of addiction and side effects has kept them from using them so far, although the Gamorean Brawler has an auto-injector with pain negating drugs and stimulants in case he gets wounded or stunned. The characters met some slavers, but haven’t had a major confrontation yet although it is bound to happen soon.

We have done 3 sessions now, it seems people are still happy with their character choices. The adventure has went off script (mine always do), but the players still seem to be interested in following the storyline to some extent. At least one player is wanting to set up a semi-permanent home they can come back to (some of our players have a soft spot for Darlyn Boda as 2 previous campaigns involved extended stays there).

The characters acquired a great deal of wealth (far more than the adventure was supposed to supply) but haven’t had the chance to spend it yet. One possible hitch being that while nearly anything they want might be available in Darlyn Boda it is full of criminals who will be more than happy to take the characters’ new found wealth off of fresh corpses.

Darlyn Boda offers a good opportunity for characters to finish their mission as there is an information broker on the planet with exceptional connections. Session 4 will begin with their arrival at Darlyn Boda and hopefully lead them to Bespin and the conclusion of the first adventure arc in Dawn of Defiance.

We have only played 2 sessions so far, but as a GM the campaign feels like a success. The players have enough money it isn’t a concern without having so much they are trying to buy private armies and fleets. At the moment they are passengers on someone else’s ship and probably will be for another two to three sessions.

The players seem happy with their characters and abilities (a couple have had run ins with bad luck and lost some gear, but with money coming in relatively easy they’ll be able to replace their losses). Session three will bring them back to the core, but to a world left in shambles by the war that hasn’t really recovered (a benefit to those seeking black market goods but also a danger as the gangs in the lawless ruined portions of the cities will take what they want by force).

I'm sorry, but we no longer support this web browser. Please upgrade your browser or install Chrome or Firefox to enjoy the full functionality of this site.